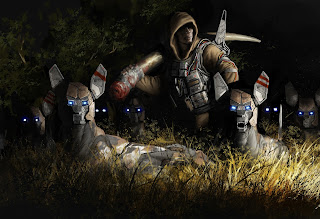 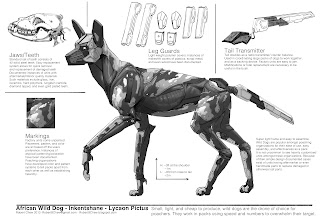 Our first glance into the poachers of Big Five.

Wild Dogs are cheap, light weight, and easy to assemble. Used mostly for recon and scouting purposes, they can also function in offensive roles when operating in large packs. Speed and numbers make up for their general lack of defense and small size. Their low cost and ease of operations has made them popular among poaching organizations. Parts are relatively easy to smuggle and readily available on the black market. After market modifications are commonplace. Typical modifications include teeth swapping, leg reinforcements, modified optics, and tail transmitter replacement.
Posted by Robert Chew at 9:40 PM 11 comments: 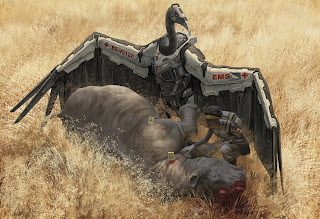 Vultures patrol protection zones providing aerial recon and basic first aid capabilities. Their main job is to locate recently poached animals and mark them for investigation.  If anti-poaching units are in the area the Vulture can land near the corpse of the animal and protect the body from consumption by other animals. Compartments in the wings and the chest area house basic first aid supplies to aid in field operations. These include bandages, tourniquets, antivenom, antiseptics, resuscitators, field rations, and water among other things. Another function is to transport DNA samples of poached animals quickly and efficiently for analysis to help keep records up to date about the remaining animal populations.Vultures also serve as locators for tagged ivory and rhino horn. By locating signals from planted GPS units Vultures can help anti-poaching units and law enforcement locate the contraband and hopefully the poachers as well.

Kinda sucks that the first real Rhino I've painted is also dead. Not fun at all looking up reference for poached Rhinos.
I'm not done with Big Five. There will be more! Stay tuned for more progress on other designs and illustrations. 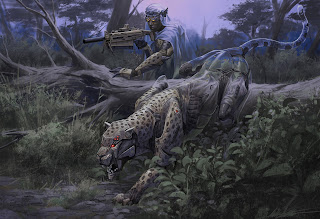 The role of the Leopard consists of stealth, light recon, and as a force multiplier. Leopards are very lightly armored consisting mostly of exposed artificial muscles and the canvas covering them. Their greatest asset is the active camouflage system. The spots on the Leopard are evenly spaced and staggered with one full spot and a ring. Through visually sampling its surroundings the rosettes adjust their color to match. The information is passed on to the next rosette over which blends with the others. Perfect invisibility still has yet to be achieved, but when working in the bush the Leopards ability to blend has proven to be incredibly useful. (See chroma sub-sampling, thermo-optic camo from GITS, and active camo from MGS4)

Hunting and tracking behavior is more or less the same as it's real life counterpart. In most cases Leopards are deployed as solitary units consisting of the Leopard and ranger to provide tactical support to the other animal squads in the area. Perching and ambushing from tree's is a popular tactic. Since it is lightly armored Leopard models can move quickly and quietly, able to maneuver and reposition with ease without giving away it's location. The paws are padded to help lower noise signature. Like the Lions, the claws and teeth are made of tungsten carbide and are retractable. The eye covers provide different viewing spectrum's and wide angle fields of vision. The daytime operations model has the tan/white covering while the night version resembles a Black Panther with deep blue/black coverings.

Wooo hooo! Done with the Big Five.... or am I. Will update you guys soon with more info.

Thanks so much for sticking around and watching my work progress. Your support has meant a lot to me. I've read all your comments and tried to respond to all of them. Your feedback has been invaluable and knowing that I'm doing something you guys can appreciate has helped push this series along. Stay tuned for updates about this project and where I, hopefully, can take it.

Thanks again
Rob
Posted by Robert Chew at 1:44 AM 2 comments: 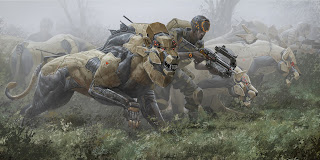 While the other animal models are employed primarily for reconnaisance and defensive roles in the field, the Lion serves a purely offensive role. Employed in packs, 1 ranger usually operates with 3 – 4 units. Rangers often combine their teams together to form prides. Like their real life counterparts the units hunt in large groups and communicate with each other through a closed wireless network giving each other real time data on positions, terrain, and proximity to their target. The operator can connect at will to each individual unit. Lioness units can be equipped with back mounted cameras to allow manual control. Typically the Lion will serves as the main hub with the Lioness's routing through.

To better serve their role as the offense Lion models are lightly armored with few solid pieces of armor. Most of the body is exposed artificial muscle covered in ballistic fabrics. As such replacement of parts is much easier to complete in the field. Teeth and claws are made of tungsten carbide which keeps an incredibly sharp edge. The teeh and claws are retractable allowing for non lethal take downs when required. Another feature are the sliding eye covers located above the ears. They provide extra eye protection as well as multi spectral views for different situations and wide angle input.

Male models are bulkier around the head with more armor and much stronger jaw muscles for a more powerful bite. They also have a large gorget type armor piece around their neck which protects the Lion during charges. Transmitters and other communication equipment are stored in the back of the head along the upper neck.

Just one more to go! The Leopard. Stay tuned and thanks for stopping by! 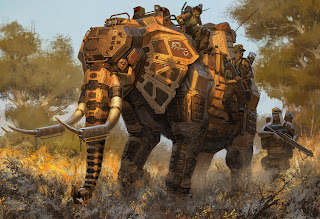 With heavy armor, incredible strength, and great size the Elephant is employed in the field as a walking fortress for the patrols. Each unit is accompanied by 3 - 4 rangers. Depending on the situation the unit can be deployed as a solitary Bull Elephant or a Matriach which accompanies the herds. Matriachs are unmanned and lack the features to support human companions due to the close proximity to the herds.

Thanks for dropping by. The Lion or the Leopard will be next.
Stay tuned :)
Posted by Robert Chew at 8:06 PM No comments: 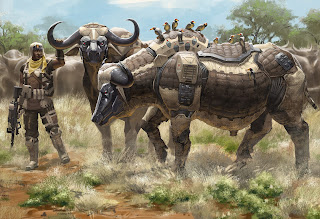 Employed in large herds of real buffalo these units patrol the herd providing real time data and intel on the animals and the terrain around them. Accompanied to each unit is an entourage of miniscule bird shaped UAV's built to mimic Oxpeckers. These little spies can easily transfer between the animals extending the observable area by many times. Due to the aggressive nature of the animals in protection the operator must remain at a distance from the primary herd. It is advisable to use either suppressed, air powered, or traditional weapons (bow and arrow/crossbow) so as not to scare the herd causing a stampede.

The African Elephant will be coming next.

Thanks for dropping by!
Rob
Posted by Robert Chew at 11:58 AM 3 comments: 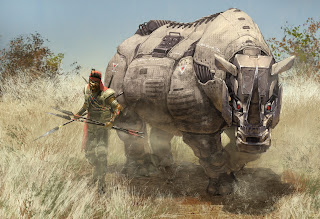 The Rhino is included as 1 of Africas five big game hunt animals. The other animals are the:
Cape Buffalo
Elephant
Lion
Leopard

I'll do designs of all 5 starting with the Rhino.
Stay tuned and thanks for dropping by!

Hello! You've reached the blog of Robert Chew. Robert is an artist who aspires to work in the entertainment industry, particularly for games.

Currently he is working at RGH Themed Entertainment in LA as a concept artist developing a theme park.
If you have any questions or comments feel free to drop me a message@:
RobertBChew@gmail.com